I wrote my first crime novel when I was 19, thirty-six years ago. I got a sniff of an interest from an agent who liked my writing but not what I had written and asked for something else. By the time I had produced another novel, she had lost interest.

I re-visited the crime genre with my Scarborough Mysteries series. The Art of the Imperfect was published in 2014. I have written four more crime novels since then; two (The Art of Survival and The Art of Breathing) have been published, the other two await next steps. 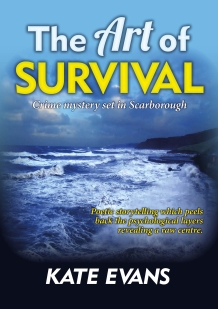 (1) Jeopardy
An agent has recently told me my crime novels lack jeopardy. She said readers today want real page-turners, they want to be kept on the edge of their seats through the whole novel. Whether this is true or not (perhaps some readers, like me, want an intriguing puzzle or a social critique or complex characters) this idea has an effect on what crime books appear on shelves.

I ask myself, therefore, how to increase jeopardy? The main way is to put someone in danger. If a writer wants to stay close to reality, this causes a problem: most murderers kill once, for a very specific reason. A writer, therefore, has to work out a reason why a murderer might be thinking about acting again.

Then there’s the question of who is going to be in danger. It has to be someone who the reader cares about. A woman, especially a young one, or a child, generally automatically garners a reader’s concern. But if a writer is not going down that route, then there is another character the reader should be getting involved with: the detective. I have noticed that more and more, it is the detective who is being put in peril in order to increase the jeopardy of the story. Obviously this causes an issue in a series, just how many times is a detective stupid enough to risk their lives in the line of duty?

(2) The lone wolf detective
Gone are the days when novels with casts of thousands – à la Dickens or Tolstoy – are acceptable, especially in crime fiction. Once a writer has a victim, the victim’s entourage, a few suspects and a team of police officers, there’s not much room for any other characters. It seems to me this might be one reason why detectives with no friends or family are becoming more the norm.

(3) Naming
I often struggle to find names which stick for my characters. Names denote all sorts of things, including age, social class, nationality, culture, race, gender. The way a character feels about their name and whether they alter it can speak volumes about them. I have a habit of having characters change their names for various reasons and sometimes I have to curb the temptation to use this trope.

It’s not a good idea to have characters with names which start with the same letter or sound similar, unless there is a particular reason for doing so. This can cut down the choice. Dickens sometimes gave his characters names which reflected in some way something about them. I am drawn to this method, though it has to be done with a light hand.

What have you learnt about writing in a particular genre?