Writing – especially writing a novel/novella – is often characterised as a solitary occupation. However, there are ‘authors’ who are, in reality, two writers collaborating, Nicci French for one. In my neighbourhood, there is Rosy Stewart, the nom de plume for writers Rosie and Stuart Larner (who also write separately).

In 2015, Rosy Stewart published Hope. The book is about a fictional women’s refuge. Each chapter tells a separate story involving the main characters with a different case. There is also an ongoing storyline threading through the chapters to the conclusion of the book. Rosie was a social worker and lecturer and Stuart was a clinical psychologist. In their professional careers they saw thousands of cases of marital discord. They have a wealth of experience of how distress can affect people and how, under the right conditions, it can be used as a springboard for personal growth. They say of Hope: ‘We want our writing to be realistic, gritty, but optimistic, giving solace to readers who might be seeking a solution to their own personal problems.’

Hope is available at: https://amzn.to/2CSG5dN 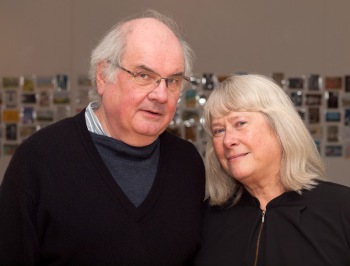 Rosy Stewart is currently working on a sequel, so I interviewed them about their writing process.

What was the inspiration for Hope? What motivated you to write it?
We wanted to write something which was accessible and popular. Abuse impacts most people in some way or other and we are very familiar with the topic through our work as health and social care professionals.

We know that domestic abuse takes many forms and is not just physical violence but it involves social, cultural and psychological factors. In Hope, and the sequel we are currently writing, we want to get across the idea that a person who has been abused need not continue to be defined as a victim, by themselves or others. Our stories aim to show that people from all backgrounds can make lasting positive changes with the help of friends, family and committed carers.

How do you write as a couple? What are the mechanics of the process?
Writing in collaboration is usually associated with comedy scriptwriting, a strategy, probably essential, to test out in practice what produces the laugh. I do not know of any detailed account of the process, but I imagine there is no set formula. Galton and Simpson, writers of Hancock’s Half Hour and Steptoe and Son, report spending long periods of silence together when working on a script: https://binged.it/2HzFHIT

Stuart and I use an approach that has evolved from lessons learned writing our first novella, Hope. Then we spent a great deal of time talking and planning each chapter and writing our own versions before coming together to merge them. As you might guess this was not easy. We had to discard rafts of material and, because each chapter’s content and style might be very different, we risked long debates or uncritical acceptance of the other’s work.

For Hope we compiled an essential outline of all central characters and their histories, and this has been an invaluable tool to refer to in writing our second book, set in the same women’s refuge. Those characters have evolved and new ones have emerged through our writing. We knew that our protagonist in both books, Sue the manager of the refuge, is strong, idealistic and determined to help individuals who have been abused. In some stories in Hope she was frustrated by the restrictions of her professional role. This has developed into an increasing tendency to take risks. So we expanded the role of her deputy, Cath, an ex-prison officer who speaks her mind and can sometimes be cynical about the motives and behaviour of residents in the refuge. She allows Sue a different perspective.

Our first step in writing our second book was to review the first book, and as a result of this we have published a revised edition of Hope. Following this, and ready to start afresh, we spent a morning brainstorming ideas for new stories that centred on individuals who might had suffered abuse. They could be any age or gender and from any social or cultural background. We came up with over twenty possibilities from which we chose twelve. Each story/chapter was to be around 4,000 words.

Once we identify a story we intend to work on, we meet and discuss ideas, getting an agreed

shape. We make only very brief notes at this stage as we try not to fix the plot, and during the following week we just think individually about possible directions for the story. I think a good deal of the work is done at this stage, not always at a conscious level. We then have a further meeting where we firm up our ideas and list plot points in the chapter. As we are writing a series of potentially stand-alone stories, we can identify a beginning and work out how, with suitable shifts and complications, we will reach our intended end, bearing in mind the word limit. Having done this we choose the parts of the story we would most like to write. Generally we quickly agree to this, though sometimes we both want to write the show rather than tell sections. In writing our latest chapter, Stuart chose the beginning of a story that starts with a fire in the refuge, and a section near its end describing a fight between an abuser and his brother-in-law. In a previous chapter, I was keen to write an account of a conflict between a homeless man and woman who turn on Sue, when she tries to help the woman. It is set on Westminster Bridge in the early hours of the morning.

The following week we put the words on the page knowing it should be completed in a week. This is not difficult as we are pretty sure we will enjoy writing those 2,000 words. We chose them. At our next meeting we merge the sections we have written and read the story aloud, then produce a written copy that one of us will edit. We return this to the other who will again edit the work. It is in editing and re-editing where we aim to bring the writing to a unified style. I feel this process has also brought our initial writing style closer.

We now send the work to another writer for critique. This is a reciprocal process and Stuart meets face-to-face with them to give and receive feedback on chapters as we write them. This ensures that we all make every effort to meet deadlines. We make notes of their comments and take these into account when editing the whole book before publication.

The method we use is suitable for the kind of material we are writing, and it is an enjoyable process, however I believe it would be very challenging to try to write a longer, more complex work in this way. We are also in a position, as a married couple to write together, meeting frequently for quite short periods of time and able to quickly rearrange our other commitments if necessary. We are both very used to others critiquing our work and because of this we do not find it threatening but a useful source of ideas.

What does writing as a couple bring which is different from writing individually?
Writing as a team, we benefit from deadlines that we give each other because our work is dependent on the other completing theirs. As we have frequent, regular writing meetings, we bounce ideas off each other and consequently have no writer’s block. Our pieces are more developed along the editorial pathway because we edit and re-edit each other’s work before finally sending it to an external editor. Having accomplished a piece and having gone through all the processes, we are much more confident about it than we would be if we were writing alone.

Stuart Larner is a chartered psychologist, who worked in the UK Health Service, and was mental health expert in XL for Men magazine. He writes plays for performance in Scarborough and York, poems, and stories. His latest books are the cricket novel Guile and Spin, and The Car: a sequence of sonnets with illustrations. http://stuartlarner.blogspot.com/.

Rosie Larner is a retired social worker and lecturer in Health and Social Care. Rosie was co- leader of a West Yorkshire Drama Workshop that focused on festival performance and members achieving external LAMDA awards. She has directed and performed twice at the Edinburgh Fringe. She has a MA in Theatre Writing Directing & Performance from York University. Rosie writes prose, poetry and plays.