As part of my marketing campaign, I did an event for Scarborough Flare – the REAL Scarborough literature festival celebrating local talent. Held in a local cafe, I presented a saunter through seven elements which make up a modern crime novel. It was illustrated with extracts from my novel plus others dating back to the nineteenth century being brought alive by my friends Felix Hodcroft and Kate Boddy. www.scarboroughflare.co.uk.

It was great fun and the audience was appreciative, though it did not yield sales, mainly 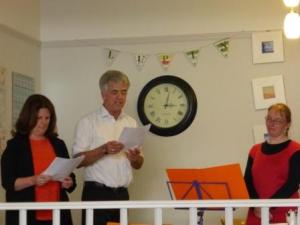 because most of the people who came already knew me and had bought a copy. I will be repeating it, however, at other venues around the town (and maybe further afield if I can get any interest) and this was an excellent confidence-boosting first run.

Marketing lore states that promotions need to be timely and relevant and that we need to know who are audience is. So are there any hooks in current affairs or any anniversaries which you could hitch your novel to? With my theme of psychotherapy and mental illness/health, I’ve made an effort to contact therapy training organisations, offering one free book to a trainee from each. Again it’s not yielded a lot of interest as yet, but maybe it is a slow burner.

It’s hard for an ‘indie’ to emulate the big organisations in collecting reader/audience information. I have an idea in my head about who my novel would appeal to: probably at least middle aged, probably a woman (though I hope not necessarily), probably someone who wants a bit of a challenging read. It’s not a bad demographic since most books are bought by middle-aged women. However, without the PR and advertising power of the traditional publishers, for an ‘indie’ to reach this audience might not be easy as they may not be as plugged into social media as a younger readership.

I have people who follow my blog – thank you to all of them. I know other bloggers who have a newsletter people can sign up to. This could be a way of finding out more about your readership, though I have not tried it. I do welcome feedback and there is an email contact asking people to get in touch at the end of my novel. No-one, so far, has done so via this method.

Freebies & give-aways
Everyone loves a freebie, don’t they? I paid to have some bookmarks made which I give away liberally, they advertise my current novel and also the series which is yet to come, so they have some longevity. On Wold Book Day I left copies of my novel around town on benches and at the railway station. They all disappeared from where they had been left. Once again, I invited anyone who picked one up to get in touch. No-one has as yet.

I joined Goodreads. I have an author page although, unless you’re famous, there appears to be some prejudice against writers who are on Goodreads. One person I sent a friend request to said she doesn’t normally respond to authors because they’re all about selling their own books. I try to be a reader on Goodreads, sharing what I think about books by other people. I’ve enjoyed some of the exchanges and I hope, maybe, some people will be drawn to my page via these conversations.

Goodreads have ‘giveaways’ and Kindle has ‘countdowns’ when you’re basically giving your book away for free. You can only do a ‘countdown’ for so many days, so many times a year. I have decided to do both a ‘giveaway’ and a ‘countdown’ on my first novel when I am ready to launch my second novel in the series later this year. From what I’ve heard on the indie network, neither ‘giveaways’ nor ‘countdowns’ necessarily translate into actual sales as people take the freebie but it doesn’t encourage others to buy it later. But since I’m more interested in finding readers than making money, this doesn’t bother me overly. Giving away via Amazon or Goodreads means that my book will probably cross the North Yorkshire border and that’s good enough for me.

Missing the Kindle boat
I think the time when an unknown ‘indie’ can sell tens of thousands just by being on Kindle has probably gone. Those extraordinary sales were during a time when there was less choice on Kindle, now every publisher brings out a Kindle version, so it’s as hard as being found in a bookshop, a vast, international bookshop. However, this book is an interesting one, even given the different times: ‘How I Sold 30,000 eBooks on Amazon’s Kindle-An Easy-To-Follow Self-Publishing Guidebook 2015 Edition’ by Martin Crosbie.

Talent, Hard Work, Luck
I believe to create a book and then find readers for it, you need a modicum of talent, a lot of hard work and shed loads of luck. I know I can provide the first two, how to create the latter is my conundrum. I think I can probably reach a few hundred readers doing what I’m doing, maybe even a thousand. What still confounds me is how to change that into a few thousand or (the dream) tens of thousands. I am not sure this is possible without a large pinch of luck. From all the stories I have heard/read, marketing is about hard graft, yes, but for a book to really take off, there is some kind of good fortune; particularly the book falling by happenchance into the hands of someone more famous than the author who will champion it. I am still waiting for that to happen!

Next week: ‘Indie’ publishing, was it all worth it?

Meanwhile, do look at my novel, ‘The Art of the Imperfect, the first of a series of crime novels set in Scarborough, http://goo.gl/5r9WBv

2 thoughts on “Confessions of an Indie Publisher – marketing (4)”